Resources old and new relating to herbs and medicinal plants

Herbal Magic - what's it all about? 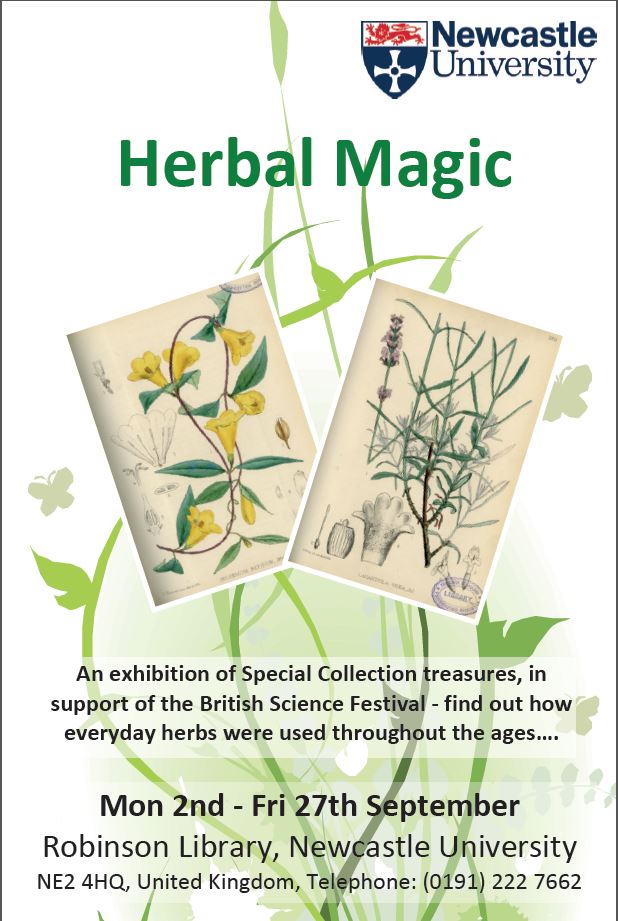 The Herbal Magic Library Guide began as an accompaniment to some workshops for school children run by the Library as part of the British Science Festival 2013. However, it's now developing as a key resource for information on herbs and other medicinal plants, to be used by students studying here at Newcastle University, as well as the local community.

Click on the tabs to the left to find out more.

Humans have known for millennia that certain plants cause harm and others have curative powers. A herbal is a book containing the names and descriptions of herbs and plants, with their properties and virtues and how they can be used, in a medicinal way.

Herbals are one of the oldest literary traditions and have been in production for at least three thousand years, being common in the Middle East and eastern Mediterranean. The herbals of the ancient Egyptians and Greeks were a compilation of plant descriptions and uses, folk medicine and a wealth of accumulated knowledge. The tradition was taken up and furthered by Arab cultures during the early medieval period. Herbals existed in medieval Europe, but were very rare until the thirteenth century (although it’s true to say that many early herbals may well have been lost due to the extent of their daily use and the ravages of time).

From the 13th Century, however, we do see the more widespread production of herbals in Europe. Herbals were rarely circulated within general society but rather were kept within monasteries to be used within their infirmaries, or in noble households or university libraries. By the fifteenth and sixteenth centuries, with the advent of the printing press, many physicians and surgeons also owned and consulted them.

Medieval herbals give us a valuable window into medieval life, disease, and the plants and herbs commonly used in treatments. To some extent they reflected common herbal lore, but more particularly they reflected the knowledge and experience of the monasteries, drawing on a tradition of centuries of ancient Greek and Arabic herbals. 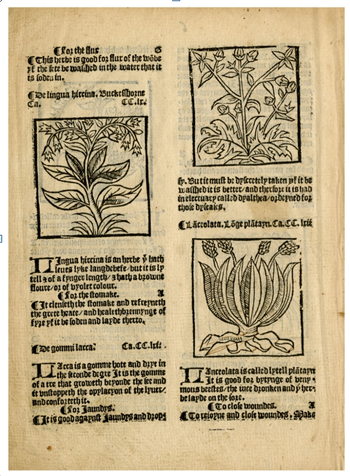 The earliest herbal we have in Special Collections comprises two leaves of the Grete Herball, which was published in 1526. This was itself one of the earliest English herbals, and one of the most famous. There are only two complete copies of this known to exist, at Oxford and at Cambridge, so to have even two leaves is rather special.

We also have an early edition of William Turner’s Herbal​ - see the local links page for more detailed information about Turner. 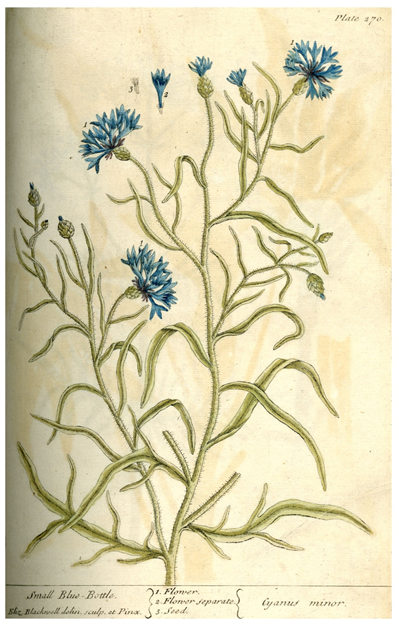 Another of our Herbal Treasures is Elizabeth Blackwell’s Herbal, published in 1739. The herbal was first published in weekly instalments over the period 1737-9, although our copy comprises all of those instalments bound into two large volumes. The herbal contains beautiful colour illustrations of plants, and filled the requirement for an up-to-date apothecary’s reference work as well as describing newly-discovered American specimens. Unusually for a woman, Elizabeth Blackwell drew the designs, engraved the copper plates and hand-coloured the illustrations herself, having first studied the specimens in Chelsea Physic Garden. Her husband possessed some medical knowledge which informed the accompanying text. Although the impetus for the book was to raise funds to secure her husband’s release from a debtor’s prison, she had support from the Society of Apothecaries and some leading doctors. It has been described as being “among the earliest publications on botany by a woman’ and as linking “an older female tradition of herbal work with an emergent female tradition of botanical illustration”.

For details of other herbals in Special Collections, as well as modern material, click on the Books tab

National Science and Engineering Week 2014 ran from 15th - 23rd March. We ran some herbal magic workshops ( try a quiz, make a bath bomb, see our ancient herbals)  as part of a "Meet the Scientist" event during the 15th and 16th March 2014, open to all. In addition our expert archivists gave a talk focusing on the rare herbals in our Special Collections.

What else have we been up to?

The British Science Festival came to Newcastle-upon-Tyne in Sept 2013.

Newcastle University Library and the School of Agriculture, Food and Rural Development worked together to run Herbal Magic; a series of workshops aimed at KS2 school pupils as part of the British Science Festival Young People's Programme.

Herbal Magic has proved to be a very rewarding experience for all involved - hear from some of our participants and volunteers talking about what they got from the sessions.